I had never made a cheesecake before I set foot in Bellingham. If I am being 100% honest, cheesecakes aren’t my favorite. I mean, yes I can crush a Cheesecake Factory cheesecake, but the thought of mixing together that much cream cheese didn’t sound appetizing.

Joanna can’t eat a handful of things because of allergies and when the time came that I would have to bake something for a lunch she’d be at I took it as a challenge.

Cheesecake with coconut sugar and an agave nectar sweetened shortbread crust. Top with fresh berries. It was more tart then cheesecake the first time I made it. But it seemed to be a winner so I tried it again for friendsgiving.

I got a little fancier with this one adding homemade whipped cream. The cheesecake was a little more cheesecake like this time around and I think much more delicious.

But, I honestly didn’t think I’d make another cheesecake, I thought it would more a recipe I could tuck into my pocket for a rainy day.

Then, my lovely friend Joanna and her then fiancé now husband Patrick asked if I’d make a dozen for their wedding.

It took my three days, one family trip to Costco, waaaaaay too many ounces of cream cheese, multiple trips to the store, filling my entire fridge with said cheesecakes, 9 spring forms, 12 microwave covers, a trip to the farmers market and of course one maid of honor turned soul sister. 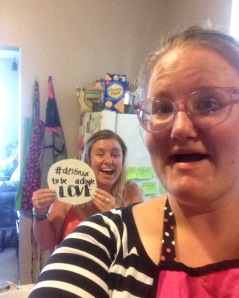 And I would do it all again tomorrow. (Though maybe I would steal their kitchen aid this time).

I love baking for people. I love giving my time and producing something that someone will enjoy.

And it might not always look perfect. It might not work out each time. But when it does…man. 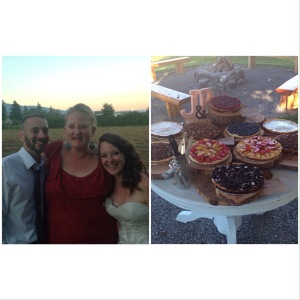 I made two more cheesecakes last week. One for a bachelorette party and one that I had made a mental note in my head to make after seeing that Joanna and Patrick only had one slice of the dozen at their wedding.

The one from the bachelorette party barely got eaten. So it just sat in my fridge for two days as the whirlwind of (another) wedding weekend happened. And Saturday night after this beautiful, holy moment took place, my crew of people ending up at my house before going out.

And we grabbed the cheesecake out of the fridge and set in on the counter and people grabbed forks and spoon and dug in.

It was messy, and there were crumbs in the floor and a couple stray pieces got left behind. To me, right there in that moment though, was perfection. We didn’t need plates or chairs or even a table. We just need the laughter and something to stand around and lean on.

And it was more than ok that we made a mess.
That’s what cooking and baking and creating in the kitchen is to me. It’s not necessarily in the perfectly made pastry, or the chocolate chip cookie that’s the same size as the other 11 in the dozen.

It’s about making a bit of a mess, and laughing and inviting people into your creation.

Really, to me, baking and cooking is about community.

It’s how I bring people together.

Be it a dozen cheesecakes for a wedding, or one eaten with plastic forks directly out of the pan as the woman changed out of their heels.

So, maybe attempt something you haven’t before, or maybe just make a friend a grilled cheese in a cold day. See what happens and what you can create when make a bit of a mess and allow someone in along the way.

Last night as I walked back and forth around my little town the wind was blowing something fierce. I had to put on a sweatshirt to walk to a friends and I was in love with the cold,almost violent wind that was making a noise down the sweet cobblestone streets of Mijas.

It got louder and more consuming. Slamming doors, throwing things off clotheslines, shifting our curtains with every inhale of air. And I couldn’t find peace amidst it.

Normally the wind brings me home, hope, calm. Even in it’s most rowdy, I revel in its presence.

Last night it scared me. It brought me unrest, I couldn’t sleep. I just wanted it to stop, I wanted there to be a moment that I could take a deep breath before it started again.

I wanted to yell at the wind. I wanted to open my mouth and shout. I didn’t like what it was riling up. I didn’t feel the peace it normally brings.

I know that wind stirs and settles and calms. It mixes things up to make them look new. It brushes away debris that doesn’t need to be there. It cleans and makes a mess all at the same time.

The wind wasn’t cleaning last night. It wasn’t allowing anything to exist inside of it. It was moving things to places where they didn’t necessarily belong and it was up to us to open doors and put things back together.

We needed to clean up what the wind left behind.

After last night I feel as if the wind left me in a mess. It was the exact picture of what I feel inside. There is this massive destructive wind going on within. Pressing against the places I’m pushing into and challenging me to stop.

To be silent and to stop.

But here’s the thing: the wind may be aggressive; but I can outlast it. The wind may put everything in disarray, but I know how to clean. The wind may scare me in the night but eventually it will be day.

And the wind will stop.

The wind will stop before I stop.

So this morning when the sun finally peeked its head out over the mountains, my curtains stopped rustling.

I opened doors and windows again and cleaned up what the wind brought.

Last night was a reminder that something stirring up isn’t the greatest, that something being pushed around and reaching the point of feeling unsettled isn’t fun.

But it also brought the picture that morning will always come. And that we can outlast the night no matter how dark it seems. Right now, the wind is doing something in me; even when it isn’t outside for me to see. It’s pushing things around and calling me to sit in the dirt and the muck and be ok.

The aggressive wind showed me that I can sit in the chaos and not become chaotic. That there can be destruction around me and I will not collapse.

And the wind will stop before I do.

thanks for stopping by

Clarence: Glimpses of My Life
The Rachel Joy Project

A Resource of House of Bread Ministry

Ramblings of a 20-something year old

Living Alive and Traveling Much

--- The Kingdom of Hope --- Cannot be Shaken.
hannah brencher.

honest essays about growing up, faith + loving others well.

stories of learning and moving forward

What a treat it would be to live grace so fully that all that could be seen in us is love.

Have your cake and eat it too! One life to live!

um, are you flirting with me?

celebrating the power of owning your narrative

fully and fearlessly
With Open Arms...

“How vain it is to sit down to write when you have not stood up to live.” ~Henry David Thoreau

Festivals in the Desert

Celebrating Newness of Life, One Tabernacle at a Time

thoughts and journeys from a peace pursuing twenty something