I’ve sat in front of my computer and feel like I’ve started multiple blogs and most times I’ve written, “I don’t know what to say”.

But of course that’s a major lie.
8 times out of 10 I know what I want to say.
What I’m learning is when or when it is not the time to say them.

Right now there are an incredible amount of thoughts, plans, stories stocked piled in my brain that I want to share. It’s so much that I don’t really know where to start. My mind flits from topic, to tangent and I end up sitting in front of my screen deleting full paragraphs of what I have started, shutting my computer and calling it a day.

Today I’m choosing to write about one I’ve been thinking on for awhile.

I have a word that I realize I despise almost as much as “process”.

I despise the word change. Every day we are attacked with things we need to change.

But is it really about change?

About 4 years ago I got this tattoo. 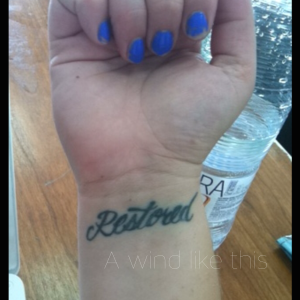 I got it after year of battling, surging through and living in depression.

That’s what I wanted to be. I didn’t want to have a present tense word tattooed on me for eternity; I wanted something that spoke of an act already completed.

In the process of life I wasn’t “changing” into a less depressed person, I was become restored into something I was already.

Take a painting for example; it’s battered, torn, ripped. A person doesn’t look at it and decide well, it has done its job, might as well scrap the thing and move on. Nope, they call in someone who restores. Who will take the pieces that are there and bring it back to its original likeness.

And that is why I hate the word change.
God doesn’t want to CHANGE us. For heavens sakes, he CREATED us. He saw us in our original beautiful form. He wants to bring us back to where we once were.

He wants to bring us back to the original likeness he created.

I think that we so often think we need to “change” because we don’t actually know what we are supposed to be.
I don’t know how many times I can say it: We don’t need to change. Change means scrap the whole thing; it means take nothing of ourselves. And God gave us so many crazy talents, gifts and desires to use.
So many to keep.

God wants to restore the world. He wants to show us what He really made us to be. That’s why it never works to go into a third world country and try to get them to act like America and do life like America; that’s not how they were designed. We can help them find what they’ve lost in themselves.

I will never ask you to change who you are. Because deep down in all of us is the foundation of encouraging, of service, giving, and love. It’s all in there. We just need to chip away at the things that hide them.

We need to bring in the one who does an amazing job at restoring masterpieces and have him work on the rips and the blemishes.

So as I walked to Spar today and especially over the last few weeks of the new term; I’ve realized that God is restoring me to what I am supposed to be. I’m different. New, strong.

My joy has been restored.

And it’s not from asking God to change me or make me into some new. It’s from walking with Him each day, in the good and the bad and seeing who HE is and in that seeing who I am.

I’m not new. I’m just me. Restored. Realizing passions and dreams that are becoming a doable reality right out in front of me.

Let’s stop changing.
Let’s get into the business of restoration.